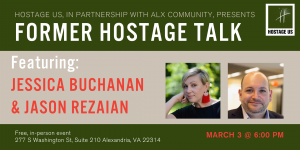 Join Jessica Buchanan and Jason Rezaian for this intimate discussion about being kidnapped and held captive – one by a criminal group and the other by a foreign state actor – and the challenges they faced when returning to life at home. This in-person event, organized by Hostage US in partnership with ALX Community, is a unique opportunity to hear directly from these two former hostages as they describe their paths of healing, surviving survival, and the importance of community support during and after a kidnapping. There will be time for Q&A.

Presented by Hostage US (hostageus.org) in partnership with ALX Community (alxcommunity.com/).