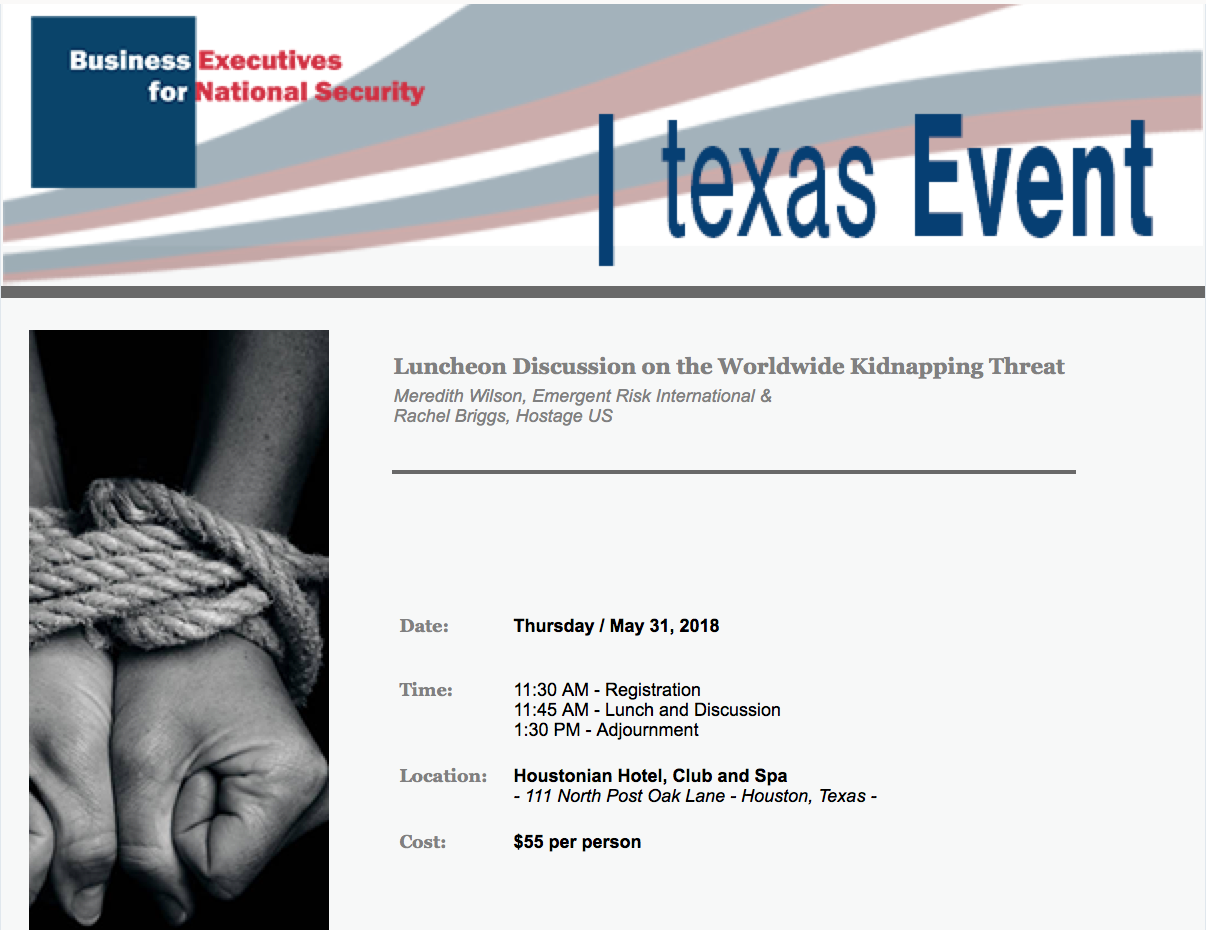 Business Executives for National Security members and guests will hold a luncheon discussion on the kidnapping threat worldwide, how the United States government responds, how you can better protect yourself and how you can support the hostage and their family through the ordeal with Meredith Wilson of Emergent Risk International and Rachel Briggs of Hostage US.

According to the State Department the “traditional” version of kidnapping, Kidnap for Ransom, is a major source of income for criminal gangs that rely on ransom to finance their operations. Kidnapping remains problematic worldwide, with tactics evolving with technology and opportunity and are so common in certain regions that local companies and criminal groups reportedly have a mutually agreed upon market price for kidnapping ransoms. Foreigners are sometimes targeted due to their high relative wealth and the incentive of a large government ransom payment. The length of any kidnapping incident can also vary widely; while many high-profile kidnapping cases are drawn out for weeks, months, or even years, 79% of reported kidnapping cases around the world last less than seven days according to a study by a private risk consulting company of incidents between 2010 and 2015. Likewise, while kidnapping incidents affiliated with terrorist groups or insurgencies tend to get the most press, the same study reports that the vast majority (80%) of kidnappings are carried out by unaffiliated criminals, with armed groups (14%) and Islamist militant groups (6%) far behind. A study by West Point’s Combating Terrorism Center on the kidnapping of expatriates from 2000-2015 found that the Middle East (469), Africa (456), and Asia (154) regions had the highest number of expatriates kidnapped. Meredith Wilson of Emergent Risk International will provide an overview of the worldwide kidnapping threat, tactics employed by these groups and business travel considerations for you and your employees.

Often, organizations do not disclose when ransom is paid because such payment can be interpreted as supporting terrorist organizations. However, a 2015 policy change noted the U.S. government will no longer threaten to prosecute families who try to pay ransom to win the release of American hostages held overseas. While attention naturally focuses on the hostage and the process to secure their release, organizations often neglect to offer their family at home the correct support and assistance during the kidnapping. Failing to do so not only causes additional stress to the family, but can have significant operational impacts on the organization. Similarly, when hostages return home, organizations often assume the work is done, when in fact hostages need a range of services – from health and mental health to practical issues that have arisen in their absence. A failure to meet this duty of care can have serious consequences – but is easily managed with the right training and focus ahead of time. Rachel Briggs of Hostage US will offer best practices for organizations in responding to the human dynamics of a hostage incident.

Meredith Wilson is the Founder and Chief Executive Officer of Emergent Risk International and Rachel Briggs OBE is the Executive Director ofHostage US. Their complete bios can be found here.